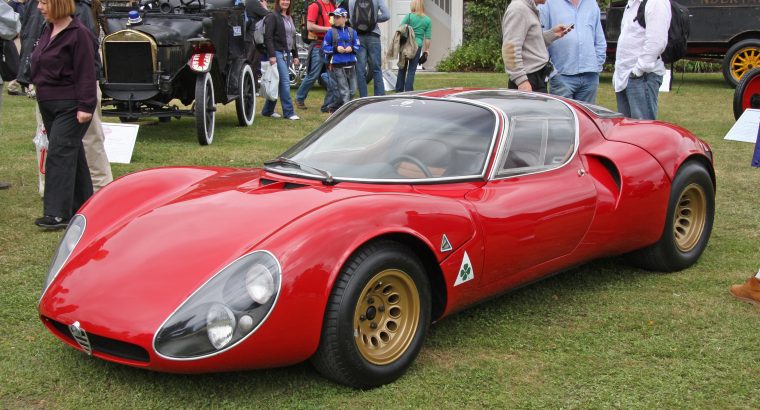 Alfa Romeo 33 Stradale: The most beautiful car ever?

Many people have their favourites cars, some old, some new. Then there are some cars that are considered classics. They stand well above others with an almost unanimous agreement from automotive enthusiasts that these particular cars define what a truly special car is. Throughout the last decades, there has been only a handful of cars that can claim to be at this level. Particularly the Italian made cars of the 1960s have become the most iconic. The Ferrari 250 GTO is often the most well-known classic car, but people often overlook the Alfa Romeo 33 Stradale. Is this the most beautiful car ever made? Let me introduce to it.

History of the Alfa Romeo 33 Stradale

The Alfa Romeo 33 Stradale was produced by the four-clover Italian manufacturer from 1967 to 1969. Designed by Franco Scaglione, the Stradale was based on the Alfa Romeo Tipo 33 race car and intended as a method of showing off the company’s racing technology. The first prototype was built in 1967 side-by-side to the Tipo 33 in the same garage, validating how similar they were. Soon after, the car made its debut at the Monza Grand Prix before officially being revealed to a great reception at the Turin Motor Show. In its short manufacturing life-span, 18 examples of the Alfa Romeo 33 Stradale rolled off the line. Although a number of these were used as prototypes for some Alfa Romeo concept cars. The Stradale launched with a price tag of $17,000 USD, not much huh? Wrong. The car was extremely expensive, as the normal price of a car at the time was only a little over $2800 USD. In comparison, Lamborghini’s showcase car, the Miura was still around 15% cheaper to purchase.

The Alfa Romeo 33 Stradale was equipped with a mid-mounted 90 deg V8 engine, producing 169kW of power, propelling the car to 100km/h in under six seconds. There were many parts in the Tipo 33 that found themselves in the Stradale, this included the Colotti transaxle gearbox and the suspension system. This allowed the Stradale to compete with its Italian rivals at the time, even proving to perform better. Lastly, an interesting piece of trivia; the Alfa Romeo 33 Stradale was the first production model vehicle to have butterfly (‘scissor’) doors.

What makes it so special?

The Stradale was produced in the golden age of classic sports cars. Ferrari, Lamborghini, and Alfa Romeo were all competing both on the track and in the market. This competition made the manufactures work extra hard to produce the perfect sports car. A common strategy was adapting racing technology to streetcars to get the upper hand over the other manufacturers. The Alfa Romeo 33 Stradale was made in such small numbers that not many people have ever been able to see one. In addition, the price tag ensured when the car was in production only the richest customers could even get near the exclusive car.

The car is considered as the masterpiece of designer Franco Scaglione, who is the father of automotive aerodynamics. With no computational assistance at the time, Scaglione sculptured the car with sweeping lines and curves using only pen and paper. The Alfa Romeo red gives the car personalty, and being hand-made makes each example unique. Simply, the sheer hand design, beautiful curves, and the exclusivity of the Stradale make the car so special. If you want to witness one these amazing cars in person, realistically the only chance you will get is at the Alfa Romeo Museum in Turin.

Can I buy one?

As mentioned earlier, there were only 18 cars made with a number of these being used for other Alfa concepts. Some reports suggest that today, fewer than 10 remain in existence. As a result, these cars are rarely sold or listed at auction. Therefore, it is difficult to put a price on the Alfa Romeo 33 Stradale. Although in 2015 Alfa Romeo North America CEO Reid Bigland estimated that the car is easily worth over $10 million USD. Using the recent sales of the Ferrari 250 GTO as a yardstick and the greater rarity of the Stradale, I would say it would be worth over $30 million USD. It is extremely rare to see an Alfa Romeo 33 Stradale in person, and even less likely to have the money to afford one (if you can find a seller!). Summarising, this car is a beautiful piece of automotive engineering. The rarity of the model only adds to the mysterious beauty the car possesses. I highly doubt that anyone who could afford this car would turn down the offer to purchase an example in an unlikely scenario. Do you agree that the Stradale 33 is the most beautiful car ever? Let me know in the comments.